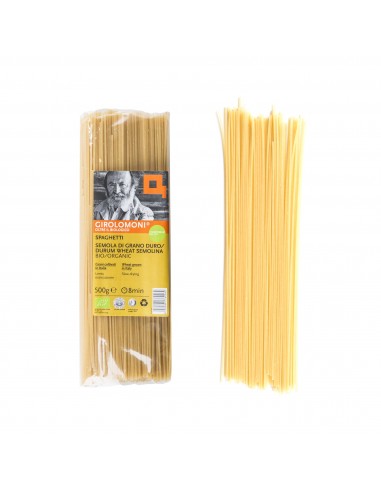 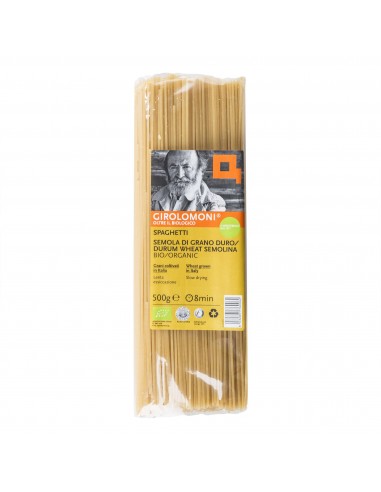 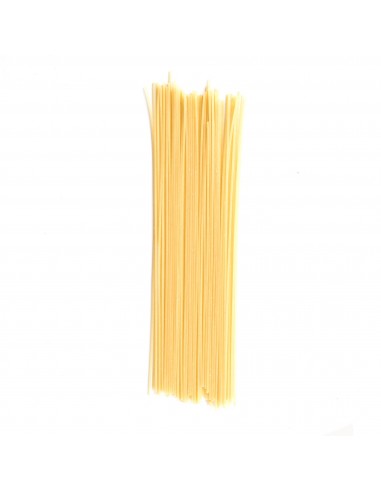 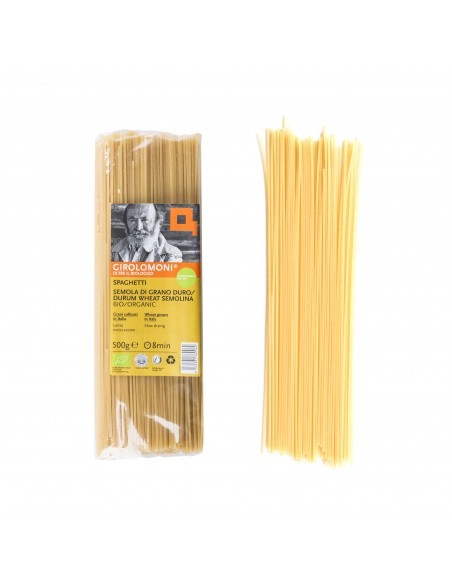 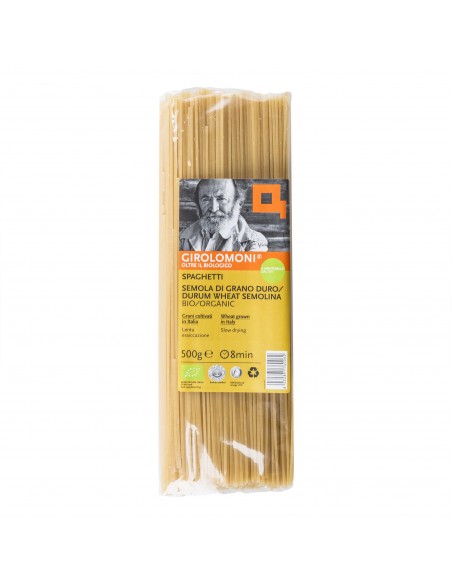 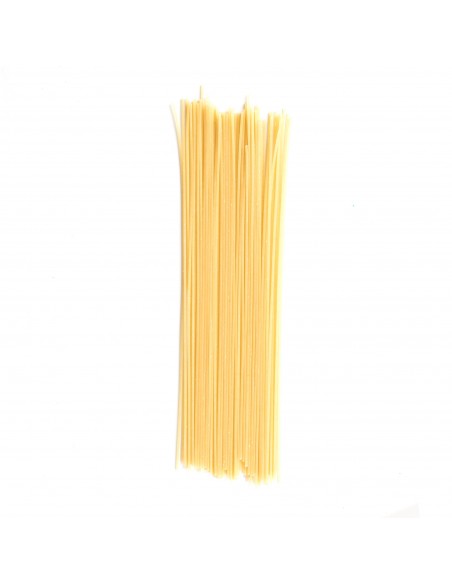 One of the main ingredients of the Mediterranean diet and Italian cuisine, pasta is perfectly represented by this Organic Durum Wheat Spaghetti. Made simply with organic durum wheat semolina and water, according to the most rigid biological methods, this spaghetti will honor every main course of Italian tradition that you will try to prepare, adding simple seasonings being able to wrap it.

Girolomoni® Durum Wheat Spaghetti are made using only durum wheat semolina, obtained exclusively from grain grown in Italy, and water from source that does not have industrial agriculture upstream. The cropped wheat is storaged in silos treated with a powder of fossilized algae and silicon dioxide to ensure the proper maintenance of cereals. The semolina, acquired from the milling of durum wheat, gives the typical amber color to pasta and enriched it with proteins and nutritional and organoleptic properties present in the grain. The semolina is mixed with water, making mix starch and gluten; the obtained mixture is then extruded through a drawing machine to give it the desired shape. This spaghetti is left to dry for about twenty-four hours so that pasta retains all the nutrients of the wheat. This spaghetti is certified by Kosher and ICEA (Environmental and Ethical Certification Institute)

Luciani
PSS300B00080
€3.56
The egg edition of the world's best known pasta shape, the Spaghetti, is certainly a winning edition. Only durum wheat semolina and fresh hand shelled eggs to create this masterpiece of quality, which keeps the whole tradition of homemade pasta of San Ginesio, handed down by women who, with just a rolling pin and a wooden counter top, could create...

Girolomoni
PSF500B00044
€1.54
Originally made by rolling spaghetti to a wire by hand before drying, the durum Durum Wheat Fusilli is an excellent symbol of craftsmanship of Italian pasta factories. Perfect to be enjoyed with traditional sauces and to create imaginative and great pasta salads, Durum Wheat Fusilli will allow you to astonish your guests with delicious main courses, and...

San Michele Arcangelo
SGP500B00011
€2.64
The Organic Tomato Purée could be one of the main ingredients for the success of a good first course; the Mediterranean diet is full of recipes using it. This Organic Tomato Sauce is prepared with the exceptional quality of organic tomatoes, grown naturally under the sun of the hills of the Marche, this delicious and authentic tomato sauce will give you...
View

SGP200B00077
€5.91
Lovers of black olives will adore this Black Olive Sauce, characterized by intense and deep flavour, absolutely unparalleled. Made from finely grinding carefully selected olives, it will be a real surprise to discover its flavour. This sauce is a perfect condiment for pasta dishes or even more delicious spread on warm bread, to savour the aroma and enjoy...

VNB750B00165
€8.93
The most fashionable rosé wine has bubbles; inevitable in this Brut Rosé Moroder, with a bright pink color with shades of purple and conclusive perlage. A wine that has aromas of red fruits and floral notes, it is good for a sparkling aperitif but also to accompany a fish meal. A pleasantly fresh and rightly acid Sparkling Wine Rosé harmonious and...
View

FRP450B00104
€8.56
Lovers of Italian pecorino cheese will be seduced by this Pecorino with Herbs, which combines good cheese with scented and spicy herbs. With its delicate flavour this Pecorino Cheese satisfies even the most discerning palates. Excellent as an appetizer, served with the traditional cured meats, it will give the best paired with a puff of sweet jam...

MRC260B00306
€6.18
A fresh and fragrant jam prepared with strawberries and lemon, two fruits that ripen thanks to the sun and that together are a perfect match. A jam really special, with the best selection of fruit present in high percentages, which returns a unique taste to the jam, as eat freshly picked fruit from the tree. Ideal for making delicious desserts, cakes,...
View

PST300B00081
€3.56
Blond hair of Lucrezia Borgia inspired the chef from Emilia who first gave life to this traditional Italian pasta shape: egg tagliatelle. A staple of the culinary tradition of the Marche, Egg Tagliatelle of San Ginesio bring to the table culture, history, but also very much taste. Great for recipes with meat based sauces or vegetables, practically perfect...

DLFM200B00512
€4.09
The Slices of Must are artisanal rusks made with grape must and enriched with almonds and aniseed. Typical of the Marche tradition during the harvest, they are particularly appreciated especially in the autumn season. Crunchy and delicate, they release an unmistakable scent and flavor and are perfect for a breakfast full of energy. Type: Traditional...

PSF500B00188
€2.40
A Pasta kind unique in the world, obtained from the best varieties of Senatore Cappelli wheat, a variety has risked extinction and only recently recovered in Italy. The Organic Fusilli Rigati Senatore Cappelli are palatable and rich in flavour. It is a pasta shape ideal for preparing traditional dishes, both the great classics and more original recipes;...
View

PSV500B00258
€4.33
If you love pasta, then you surely appreciate this wonderful egg pasta, perfect to make lasagne, cannelloni and, overall, the original Vincisgrassi Marchigiani. Rolled by hand, according to the tradition, this pasta, made with natural ingredients and fresh eggs broken by hand, guarantees a perfect cooking and especially an authentic taste, respectful of...
View

PSP500B00187
€2.40
Made with a variety of wheat that can be defined "the chosen variety" , both due to its exceptional proteic and organoleptic characteristics, both to the fact that it is the ancestor of many other varieties, Organic Penne Rigate Senatore Cappelli, drawn to the bronze and dried at low temperatures for about 8 hours. The dishes made with Penne Senatore...
View
Tap to zoom