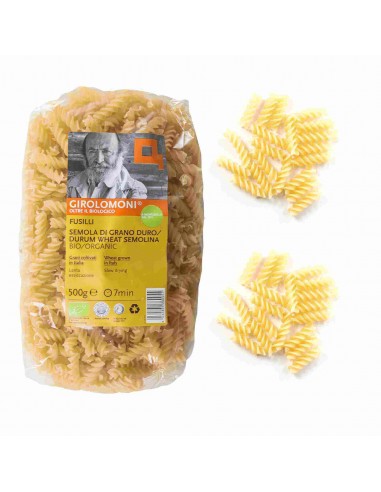 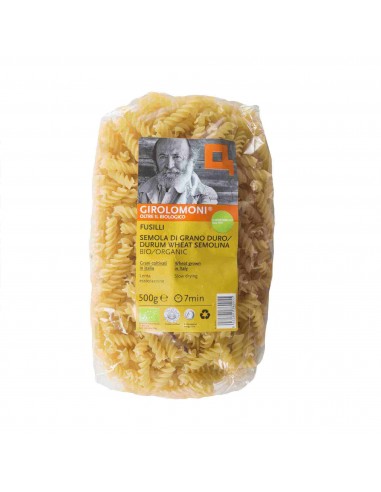 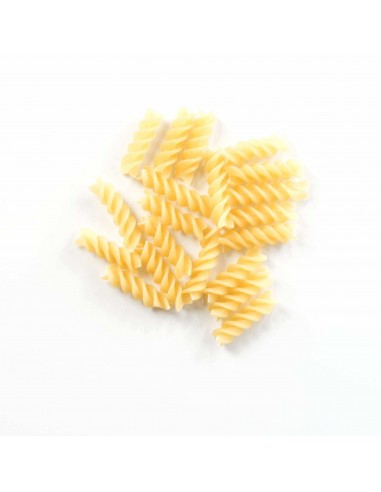 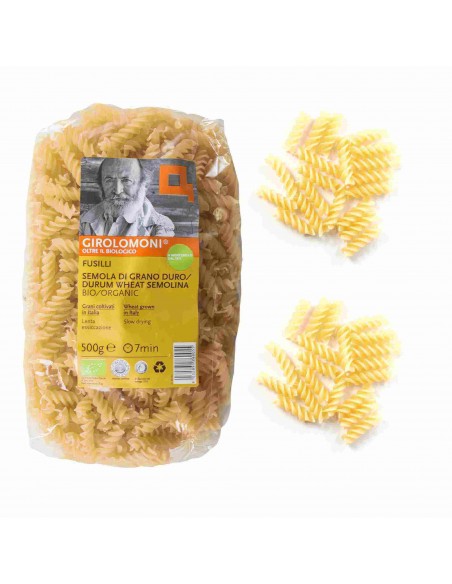 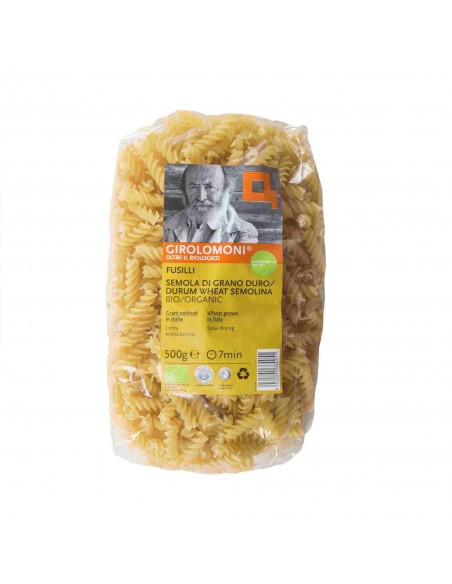 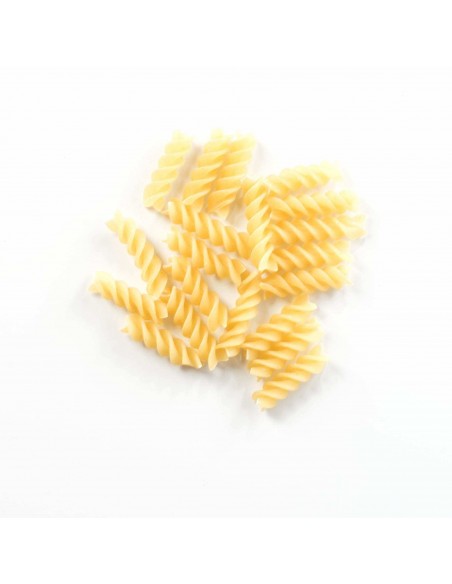 Originally made by rolling spaghetti to a wire by hand before drying, the durum Durum Wheat Fusilli is an excellent symbol of craftsmanship of Italian pasta factories. Perfect to be enjoyed with traditional sauces and to create imaginative and great pasta salads, Durum Wheat Fusilli will allow you to astonish your guests with delicious main courses, and to turn you into true artisans of the taste.

Durum Wheat Semolina Fusilli, made according to the biological method, goes “beyond the biological philosophy", demonstrating a profound respect for the people who inhabit this territory. The Girolomoni® pasta is produced in the pasta factory of the Girolomoni family located in Montebello (PU) with Italian raw materials and water from a source that has no industrial agriculture upstream. In addition to practicing a method of farming that does not involve the use of synthesized chemical substances, on the hill of Montebello, farmers use almost exclusively energy from renewable sources. Once get the flour from the milling of durum wheat, it is mixed with water to create a smooth dough. After the drawing process to give the desired shape, Fusilli are left dry for about 8 hours in order to retain entirely the nutritional properties of the wheat in the pasta.

General Information: Pasta is cheap and easy to prepare; you have to cook pasta but you can eat it warm or cold, as pasta salad, you can toss it just cooked or sauté it in a pan before serving. How to eat: Bring a large pot of water to a rolling boil (around 1 litre for every 100 grams of pasta that you want to cook), add salt to taste; add the pasta to boiling water and stir softly; cook for about 7 minutes, for authentic Italian "al dente" pasta, start counting the cooking time when the water returned to a boil. Drain the pasta and serve with your sauces and favorite toppings.

Girolomoni
PSS500B00045
€1.54
One of the main ingredients of the Mediterranean diet and Italian cuisine, pasta is perfectly represented by this Organic Durum Wheat Spaghetti. Made simply with organic durum wheat semolina and water, according to the most rigid biological methods, this spaghetti will honor every main course of Italian tradition that you will try to prepare, adding...

Girolomoni
PSS500B00037
€3.17
A dish of spaghetti cannot miss on the table whose seeks to experience the culinary tradition of the Marche. Whole Emmer Flour Spaghetti allows you to propose innovative recipes while keeping unchanged the link with the origins of the Italian culinary tradition. An ancient grain at the service of the main ingredient of the Mediterranean diet, the Pasta:...

San Michele Arcangelo
SGS270B00248
€4.09
The Organic Tomato Sauce is the result of a carful processing of one of the main Mediterranean products, the tomato. Made with only the highest quality ingredients, tomatoes, carrots, celery, onion, garlic and extra virgin oil, all rigorously organic, this sauce is a real pleasure to be enjoyed simply added to a dish of pasta. Lovers of Italian food...
View

Girolomoni
PSF500B00188
€2.40
A Pasta kind unique in the world, obtained from the best varieties of Senatore Cappelli wheat, a variety has risked extinction and only recently recovered in Italy. The Organic Fusilli Rigati Senatore Cappelli are palatable and rich in flavour. It is a pasta shape ideal for preparing traditional dishes, both the great classics and more original recipes;...

DLP500B00348
€20.00
This artisan Panettone Marchigiano is really special, near and dear to our hearts, just because it takes inspiration from one of the most famous Christmas cakes of the Marche Region, namely the "Pizza de nata" or "Pan Nociato", a sweet pizza bread  which represents the rural culture. The artisan Panettone Marchigiano of Pasticceria Mimosa is an ancient...
View

Panbrillo with Chocolate and Rum

DLP650B00477
€20.91
The combination of rum and chocolate has always been one of the most refined and thanks to the creations of the pastry chef Roberto Cantolacqua it can be enjoyed in a silver plate. Panbrillo with Chocoate and Rum is the perfect union of these two delicious ingredients, a soft leavened product that contains milk and dark chocolate drops and that it's...

VNR750B00158
€9.67
A Rosso Conero Doc, which is noted for its fruity aroma tending to pomegranate and vanilla. Structured and full bodied, this red wine Rosso Conero Campo Fiorito comes from grapes grown only on the Conero promontory, and perfectly embodies the close link that exists between the Marche and its excellences. Its flavour has mineral notes and a slight hint of...
View

PSL250B00356
€3.37
It is one of the pasta shape more well known and loved in the world, a mix between spaghetti and bavette. The Campofilone Linguine, to the characteristic shape, add all the khowledge of the egg pasta production from Campofilone and the result is an high quality product, made with an high percentage of fresh eggs, for a result very appetizing. Ideal to...

PSC250B00274
€3.37
The tradition of Italian egg pasta is strong,  one of the most famous egg pasta in the world is Campofilone pasta. In Campofilone the production of homemade pasta is a flagship and has an ancient history, when the housewives were true stars. All this explains the exceptional quality of this Campofilone Pasta alla Chitarra, ideal for making great pasta...

CCT050B00378
€2.91
If you are among those who prefer milk chocolate this block is the perfect compromise for a healthy option. The sugar-free milk chocolate bar is made with the finest  cocoa and without sugar, but just a sweetener, perfect for people who want to keep in shape. When  you are craving  some chocolate this is the best block for you! Type: Block of sugar...
View

LGF500B00121
€8.17
Solfì Beans are a specialty recently rediscovered and returned to production in the Marche. These little, tender and swollen beans, are rich in nutrients and highly digestible, enough to be recommended by nutritionists also in the diet of children. Their thin peel, creamy texture and delicate flavour are all features of this delicious legume, it can...

VNS750B00162
€6.80
Very versatile wine, suitable to juice up the dishes it accompanies, the Syla combines two grape varieties, Syrah and Lacrima, giving excellent freshness and minerality and a long persistence. This Italian rosé wine is characterized by a fine and very elegant scent, with fruity notes, making it a perfect travel mate in the taste paths of the Marche...
View

MLM240B00501
€6.00
Millefiori Honey is characterized by great aromatic richness, the result of the creative inspiration of nature and expression of the honey crops present in the company. An excellent product in an elegant and original jar that expresses all the attention to detail of the Nicoflori company Type: Millefiori HoneyProducer: NICOFLORIMade in: Marche...

CCC180B00134
€7.45
Just a sample and you can no longer do without this Spreadable with 58% Hazelnuts Chocolate, precisely where hazelnuts are the main ingredient. A delicate cream and the heady scent, a true delicacy that will drive all gluttons crazy, simply spread on fresh bread or biscuits to savour all the balanced and fascinating flavour, absolutely perfect for filling...
Tap to zoom