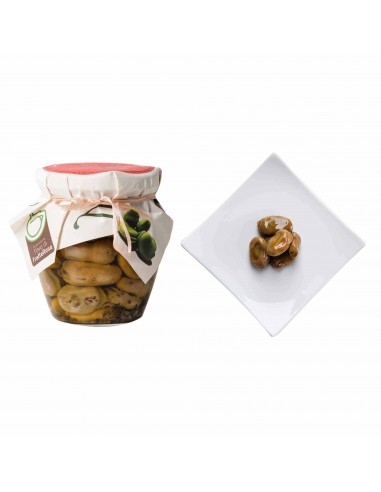 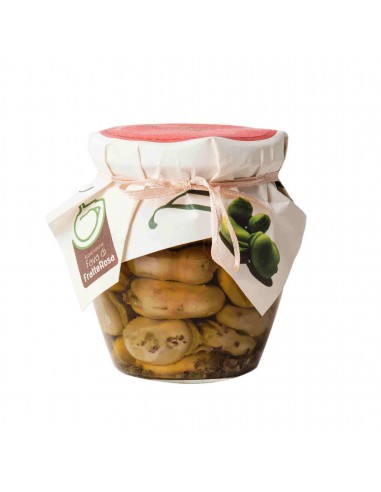 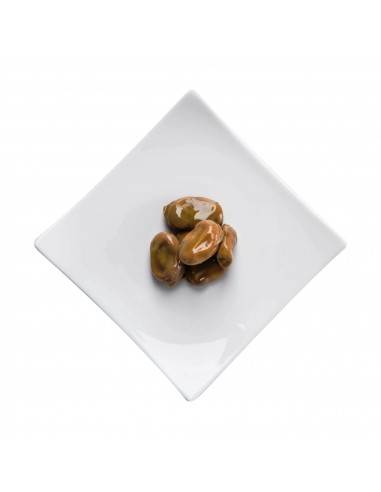 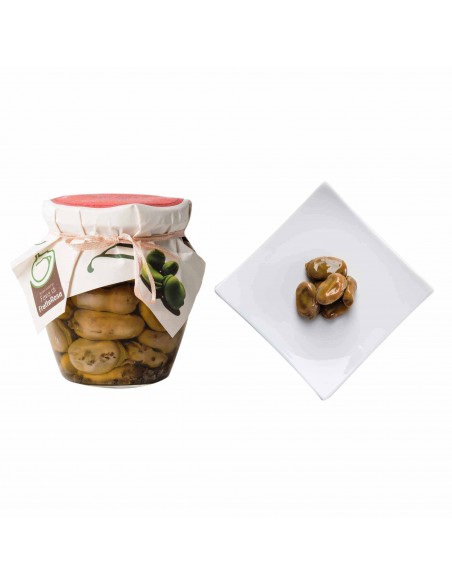 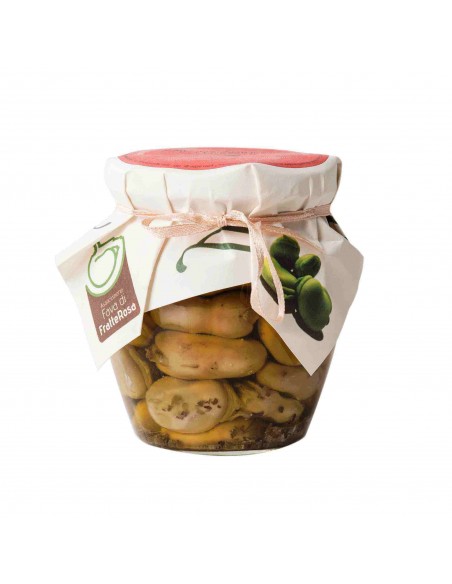 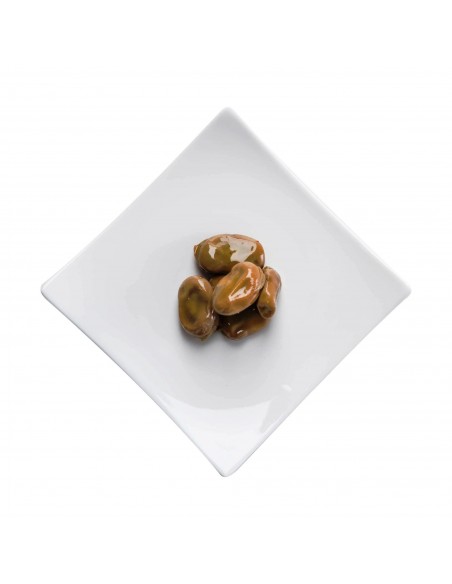 From poor product to valuable resource for the local community, the Fava Bean of Fratte Rosa is a local variety of fava bean with a sweet and tender seed, even when fully ripened. With the simply addition of organic extra virgin oil, organic oregano and organic chili pepper, you can taste all the flavours of the countryside of the Marche. A simple but savoury proposal that will make you discover the unique taste of this frequently unknown legume.

Fratte Rosa is located between the valleys of Metauro and Cesano, more than 400 meters above sea level. Its territory is characterized by clay and chalky soils, known as "Lubachi", where, during the first ten days of October, the fava bean of Fratte Rosa is planted, in holes that are about 70 cm apart. The seed maturation takes place on May and June. The fava bean of Fratte Rosa is part of the leguminous family, and precisely the kind of "vicia" and the species of "faba maior L". It is a native variety of the Marche, which comes with a short and slightly stocky pod, containing 3 or 4 large and rounded seeds. This variety of fava bean has emerged in the area around Fratte Rosa, standing out from the others because its particular sweetness and softness even at full ripening. The change of customs and habits, imposed after the war, had led to the abandonment of the cultivation of this variety of fava bean relegating it to a few older tradition-bound. The project of restoration and enhancement of the fava bean ecotype of Fratte Rosa began in 2000; thanks to the research activities of the municipality of Fratte Rosa in collaboration with various regional bodies, but above all thanks to the work of local farmers elected to "Guardian Farmers", the seed was finally recovered.

Close to the town of Fratte Rosa (PU), Azienda Agricola i Lubachi cultivates cereals and fodders with the organic method. The company's goal is to rediscover old traditional productions combining respect for origins with respect for the land. The company participates to the project of varietal recovery of Fava Bean of Fratte Rosa, collaborating with the Experimental Institute for horticulture of Monsanpolo del Tronto(AP) and the Faculty of Agriculture of the University of Ancona. The company bears the name of the land where is located, in fact, Fratte Rosa is on heavy clay soils known as "I Lubachi".

General information: The oil is a natural preserving agent, especially effective for food. The fava beans in olive oil are ideal for composing appetizers, dressing salads or creating side dishes. How to eat: You can drain the fava beans and serve directly with meats and cheeses, or with richer dishes such as roasts and stews, or you can use them to make tasty salads or prepare delicious appetizers.

I Lubachi
LGF180L00112
€6.18
Legumes pickled in oil is definitely one of the most eccentric ways of taste them, but certainly also one of the most appetizing. Only fresh fava beans, extra virgin oil, garlic and wild fennel, to create an unusual appetizer or an astonishing entree. Approved even by those who are very attentive to the shape but also to the life's pleasures, these Fava...

I Lubachi
SGP150L00113
€6.00
This Fave Beans Pâté with Wild Fennel is a true Ambassador of excellent foods and wines of the Marche. Three simple ingredients, fava beans, extra virgin olive oil and wild fennel, expertly blended to create a unique delicacy. An ode to the pleasures of good eating, made of a typically low fat and low calorie legume and the most aromatic herb, you can't...

I Lubachi
PST250B00114
€3.85
Tacconi, very similar to tagliatelle, is a traditional pasta shape made of eggs, wheat flour and fava bean flour. This particular flour is obtained by working peeled fava beans of Fratte Rosa on stone flour mill. Compared with other flours, the fava beans flour has fewer calories thanks to lower carbohydrate content. Tacconi is the right balance between...

I Lubachi
SGP150L00279
€6.00
This Fave Beans Pâté with Chilli Pepper is a real delicacy coming form Fratte Rosa, in the Marche. Three simple ingredients, fava beans, extra virgin olive oil and chilli pepper, expertly blended to create a unique sauce. An ode to the pleasures of good eating, made of a typically low fat and low calorie legume and the most hot spice, the chilli pepper,...

LGC500B00122
€4.23
Quercia Chickpeas are unique to the Marche. This ancient varieties of chickpea has come down to today thanks to the dedication of those who wanted to preserve the quality and history, to bring to world’s tables an absolutely genuine and delicious product, rich in nutrients and taste, suitable for the realization of very good soups or minestre and...

VNV750B00169
€9.75
Produced only with grapes from organic vineyards, this Vigneti di Belisario Verdicchio di Matelica is a wine with a particular flavour almost aristocrat, who gives nothing to fashions. An extraordinary ability to age for a Verdicchio that manages to combine the typical aromas of almond, anise and acacia flowers to unique citrus freshness. Type:...
View

TRS090B00061
€4.00
This Black Truffle Sauce will be the answer to the wishes of all the lovers of black truffle. Made with a mix of exquisite mushrooms and the unmistakable taste of black truffle, this sauce will give to taster truly unique, rich and delicious sensations. Prepared according to old family recipes, processing the black truffle with the attention it deserves,...
View

PSS500B00045
€1.54
One of the main ingredients of the Mediterranean diet and Italian cuisine, pasta is perfectly represented by this Organic Durum Wheat Spaghetti. Made simply with organic durum wheat semolina and water, according to the most rigid biological methods, this spaghetti will honor every main course of Italian tradition that you will try to prepare, adding...
View

PSP500B00043
€1.54
One of the most famous shapes of pasta, Penne Rigate represents a cult of Italian culinary tradition. This pasta is obtained exclusively with organically grown Italian durum wheat, bronze dies and slowly drying. The hand-crafted production ensures to pasta better firmness while cooking and a unique taste. Penne Rigate will allow you to satisfy your...
View

FRP450B00417
€8.56
An evocative name, which brings us immediately to imagine the green heights of the Sibillini mountains, the flocks of grazing sheep and shepherds who watch carefully over them. The result from all this care and dedication are some of the best dairy products from our Region, like the “Pastorello” cheese, made in Belforte del Chienti by Di Pietrantonio...

CCT050B00129
€3.27
Chocolate is a passion, as well as coffee, joined together are an explosion of goodness. Pure Milk Chocolate Bar With Coffee is the perfect combination of milk chocolate and coffee of the finest arabica variety, which creates sensations of genuine delight in the mouth. A smell of coffee envelops your nose and the final note leaves a persuasive reminder of...

SGO350B00075
€9.42
Green Olive "Ascolane del Piceno DOP" are a real and authentic delicacy of the Marche. From this wonderful fruit come high quality products, but green olives Ascolane are delicious even eaten simply au natural. A perfect appetizer or aperitif has to include them, their rich flavour and fruity not fail to impress and satisfy even the most refined and...

CCT050B00392
€4.27
The Orange and Vanilla 70% Dark Chocolate bar is a superb meeting of flavors. Very fine dark cocoa scented with citrus notes of orange and the sweet aroma of the most precious vanilla. The final result is a tablet with ancient aromas for a combination that conquers the most demanding palates and that they really like! Type: orange and vanilla dark...
View

VNL750B00240
€21.97
A wine of great structure emanating enveloping scents that recall purple flower and berries; Lacrima del Pozzo Buono wine is ruby red with violet hues great paired with savoury foods, grilled meats and stews. The Lacrima wineyard is the indigenous black grape par excellence of the Marche. There are documents that testify to its cultivation in the...
View
Tap to zoom