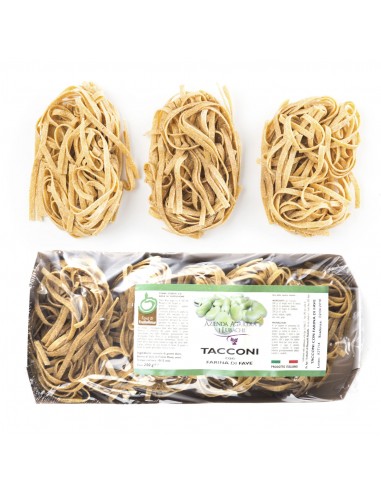 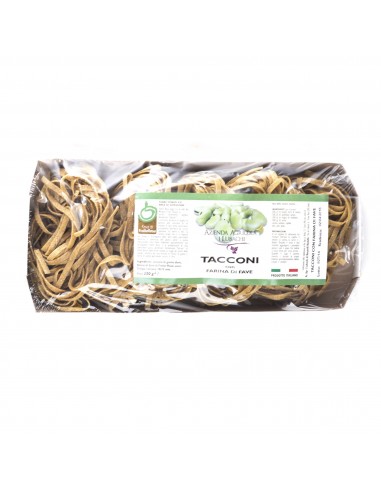 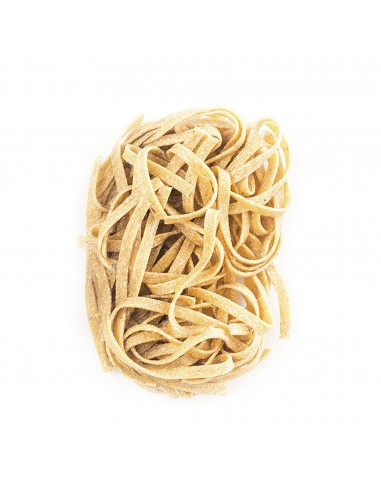 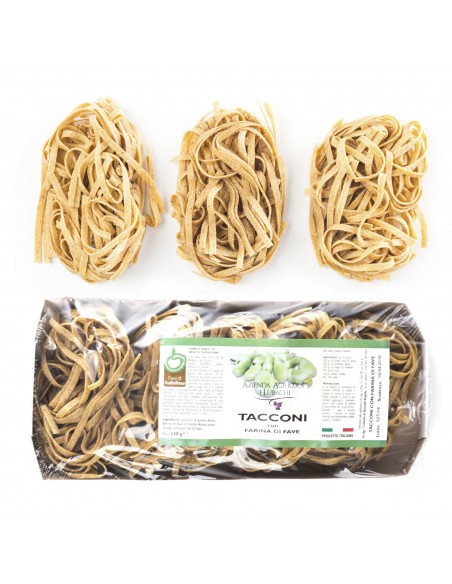 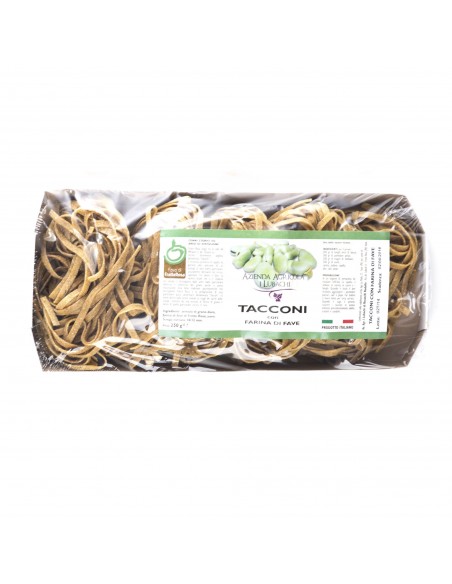 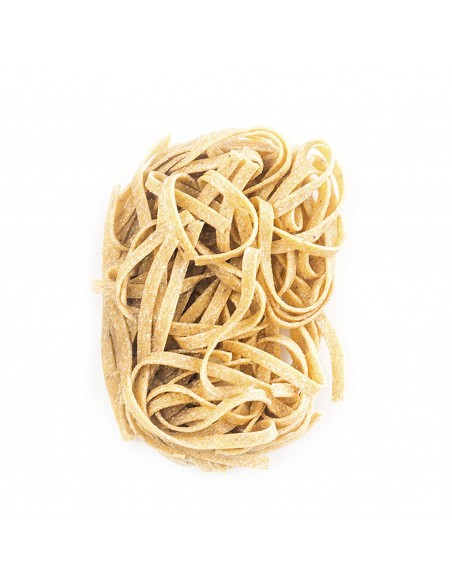 Tacconi, very similar to tagliatelle, is a traditional pasta shape made of eggs, wheat flour and fava bean flour. This particular flour is obtained by working peeled fava beans of Fratte Rosa on stone flour mill. Compared with other flours, the fava beans flour has fewer calories thanks to lower carbohydrate content. Tacconi is the right balance between health and taste; ideal when served with a meat based sauce, excellent if simply tossed with ricotta and courgettes.

Fratte Rosa is located between the valleys of Metauro and Cesano, more than 400 meters above sea level. Its territory is characterized by clay and chalky soils, known as "Lubachi", where, during the first ten days of October, the fava bean of Fratte Rosa is planted, in holes that are about 70 cm apart. The seed maturation takes place on May and June. The fava bean of Fratte Rosa is part of the leguminous family, and precisely the kind of "vicia" and the species of "faba maior L". It is a native variety of the Marche, which comes with a short and slightly stocky pod, containing 3 or 4 large and rounded seeds. This variety of fava bean has emerged in the area around Fratte Rosa, standing out from the others because its particular sweetness and softness even at full ripening. The change of customs and habits, imposed after the war, had led to the abandonment of the cultivation of this variety of fava bean relegating it to a few older tradition-bound. The project of restoration and enhancement of the fava bean ecotype of Fratte Rosa began in 2000; thanks to the research activities of the municipality of Fratte Rosa in collaboration with various regional bodies, but above all thanks to the work of local farmers elected to "Seeds Saver", the seed was finally recovered. The particular flour to make Tacconi is obtained by working peeled fava beans  of Fratte Rosa on stone flour mill.

Close to the town of Fratte Rosa (PU), Azienda Agricola i Lubachi cultivates cereals and fodders with the organic method. The company's goal is to rediscover old traditional productions combining respect for origins with respect for the land. The company participates to the project of varietal recovery of Fava Bean of Fratte Rosa, collaborating with the Experimental Institute for horticulture of Monsanpolo del Tronto(AP) and the Faculty of Agriculture of the University of Ancona. The company bears the name of the land where is located, in fact, Fratte Rosa is on heavy clay soils known as "I Lubachi". 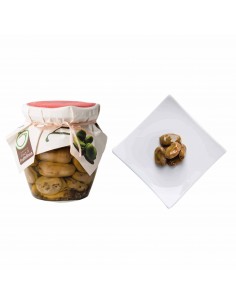 I Lubachi
LGF180L00111
€6.18
From poor product to valuable resource for the local community, the Fava Bean of Fratte Rosa is a local variety of fava bean with a sweet and tender seed, even when fully ripened. With the simply addition of organic extra virgin oil, organic oregano and organic chili pepper, you can taste all the flavours of the countryside of the Marche. A simple but... 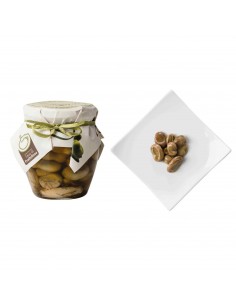 I Lubachi
LGF180L00112
€6.18
Legumes pickled in oil is definitely one of the most eccentric ways of taste them, but certainly also one of the most appetizing. Only fresh fava beans, extra virgin oil, garlic and wild fennel, to create an unusual appetizer or an astonishing entree. Approved even by those who are very attentive to the shape but also to the life's pleasures, these Fava... 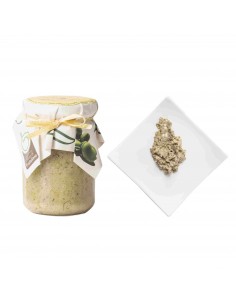 I Lubachi
SGP150L00113
€6.00
This Fave Beans Pâté with Wild Fennel is a true Ambassador of excellent foods and wines of the Marche. Three simple ingredients, fava beans, extra virgin olive oil and wild fennel, expertly blended to create a unique delicacy. An ode to the pleasures of good eating, made of a typically low fat and low calorie legume and the most aromatic herb, you can't... 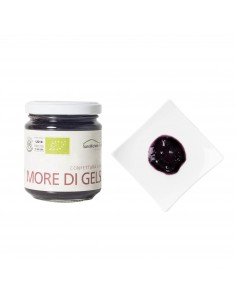 MRC220L00207
€6.27
The Organic Mulberry Blackberry Compote is a delicacy containing all the intense flavour of these small and fragrant fruits of black-purple. Its sugary taste, delicate and not acidic, makes it perfect to be spread on slices of bread, to be used to prepare tasty tarts or to be combined with tasty pecorino cheeses. The only ingredients that compose it are... 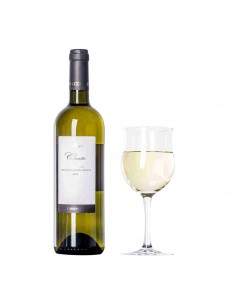 VNC750B00155
€8.77
A full-bodied, fresh and balanced taste, deep and bright colour, an important structure based on minerality and an amazing ending in honour of the fruit; the Casta Passerina Carminucci is typical white wine of the Marche paired well with delicate meals, which is one of the products that represent the best expression of Piceno. Type: Passerina DocProducer:...
View 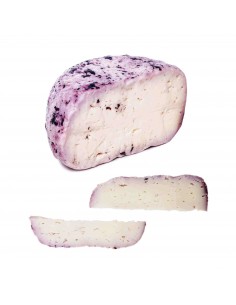 FRP450B00109
€10.48
Pecorino Cheese with Vinacce di Vernaccia is a real treat for fans of cheese. A special processing with Vernaccia di Serrapetrona and aged in oak barrels like wine, this product has a very particularly fine and elegant taste. It will conquer all palates with its sweet and fruity flavour that makes it suitable for be consumed as a starter, but, why not,...
View 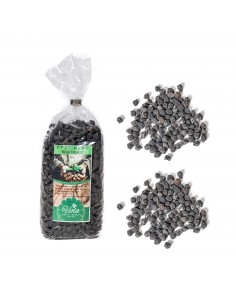 LCC500B00372
€4.52
The Organic Black Chickpea is a very particular variety of chickpea because it has a black and rather wrinkled skin. They have an intense and savory taste, especially if consumed alone with excellent extra virgin olive oil. Tipologia: Black ChickpeasProduttore: Azienda Agricola La ViolaProdotto in: Marche (Italia)Peso netto: 500gr

PACK0001
€2.87
Choose any type of product and Tasting Marche will find the best solution to wrap your gift and send it to the receiver. By purchasing this service you will personalise your gift, packaging it in elegant gift basket, and make it be delivered directly to the receiver.The Tasting Marche’s business card will be perfect to write your wishes that we will sign... 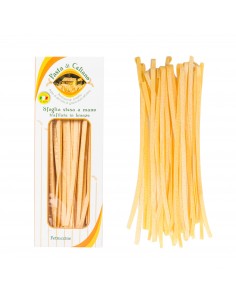 PSF300B00222
€3.56
A pasta shape much loved and appreciated by chefs around the world, Egg Fettuccine gave even the name of a famous dish that is particularly famous abroad: “Fettuccine Alfredo”. This pasta shape is made with durum wheat semolina and fresh eggs broken by hand, just as the housewives did in the past, the final result is a dish rich in taste and tradition...
View 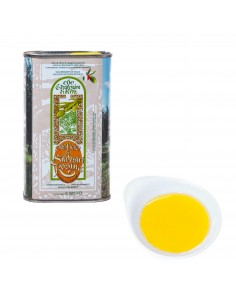 Extra Virgin Oil In Can 500 ML

OLO500B00328
€9.33
It’s well know: Extra virgin olive oil is an italian must have. Just a drop of this nectar add a special taste to every dish. On the top of that this Extra Virgin Olive Oil has some special gleaming golden glares with fresh and fruity aroma. Perfect to enrich every dish, it coul be a special cadeau, thanks to this special and elegant can which preserve... 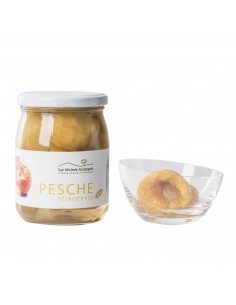 MRP500B00009
€5.91
The sweetness of ripe fruit preserved in simple syrup made of water, organic cane sugar and organic lemon juice, makes this product a true delicacy. Give yourself the luxury of tasting Peaches at any time and in any season, especially after a meal, a really superb delicacy that will became a real "obsession" for your palate.  Type: Peaches in... 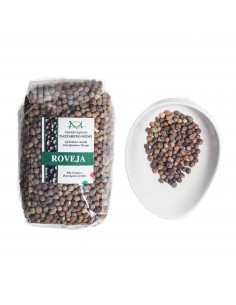 LCG300B00339
€7.69
The Roveja is an ancient legume very important for our own tradition. This little wild pea, dark green color almost brown, over the past centuries was grown along the Apennine ridge and it was the real star of farmer diet, who used to consume it along with other poor legumes such as lentils, cicerchia beans and  fava beans. Nowadays very few farmer are... 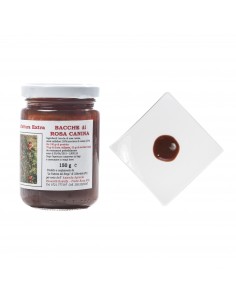 MRC150L00211
€5.91
The wild rose  is very useful for strengthening the immune system and it's a magnificent fruit  to prepare a good Wild Rose Preserve, to use in many different ways. Type: Organic Wild Rose Extra JamProducer: Azienda Agricola "I Lubachi"Made in: Marche (Italia)Net Weight: 150 g
Tap to zoom